Need a design for your Jekyll blog? Whether you're looking for a fresh theme to drop in and go, or to use as a starting point for customization, you'll find the best ones available right here. 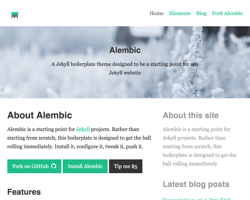 Alembic is a starting point for Jekyll projects. Rather than starting from scratch, this boilerplate is designed to get the ball rolling immediately. Install it, configure it, tweak it, push it.